Hot Dogs in the Windy City

Chicago is famous for its hot dogs. Unlike Toronto, there are perhaps dozens of establishments in the Chicago area where the humble wiener is the #1 item on the menu. This year, I decided to do a bit of Tuber Research and track down some of the better-known hot dog spots.
Well, first up was Hot Doug's at the corner of N. California and Roscoe. 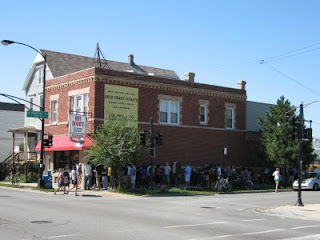 Yikes! I arrived at 10:45 am to find a lineup around the corner and down the street. I got in line, didn't move during a ten-minute wait, and decided that was enough time to spend on a hot dog, no matter how highly-rated it is. And it is, from what I've read. Hot Doug's offers a variety of sausages, including "duck-fat fried french fries" on Fridays and Saturdays. Well, lets see if I get lucky at a spot up the road a bit.
Next stop: Chubby Wieners on North Western at Leland. 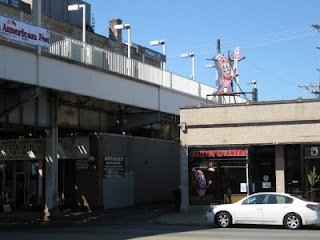 Yikes again! Chubby's couldn't be more conveniently located, right under the Western stop on the Brown Line, but here we are, after 11am on a Saturday, and it's closed! I'm not doing so well, am I? I do have another back-up location to try, though.

It's on to U Lucky Dawg, further up N. Western, north of Pratt Avenue. 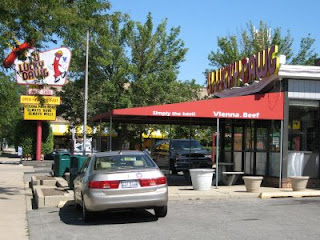 Bingo! It's Open, we have a nice Iconic Sign praising Vienna Beef products, and I'm hungry. I ordered a hot dog and a polish sausage. I preferred the latter, although they were both good. My dogs come with mustard, onions and sport peppers (something I've only seen in Chicago, they're these little green things of variable texture and heat). One sport pepper exploded over my t-shirt - this is a fine spot for a great dog. I did feel lucky!

So lucky, that I was ready to try one more location in Chicago's north side.

It's back down the street and around the corner to Wolfy's on W. Peterson at Fairfield. 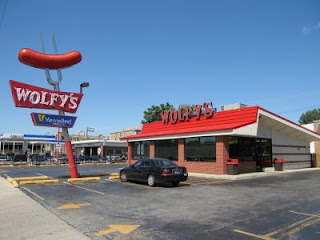 Open...check! Iconic sign out front...check! Vienna beef served here...check! A generous parking lot, and time for a Char-Polish all-beef sausage. Yum! By this time, I had learned to add celery salt to the ingredients, although I want no part of the traditional "Chicago dog" makeup of neon green relish, slice of dill, and tomato slice. And one thing about hot dogs in Chicago. No. Ketchup. Ever. Ever! Fine by me, I don't like ketchup. My sport pepper on this dog was kind of wrinkled, not juicy at all, and not particularly spicy. But the sausage itself was delicious and perhaps edges out U Lucky Dawg by a nosehair. Well, I'd like to return to both spots, maybe in reverse order, to try 'em both one more time.

Another day, another visit, another dog. Let's hit the south side for a couple of Maxwell Street legends. First, we have the Express Grill. 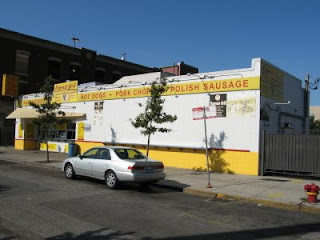 The Express Grill is open 24/7, and since its move from Maxwell Street (a block over, now dominated by buildings owned by the University of Illinois), it sits on Union Street, eye to eye with the Dan Ryan Expressway, and next door to its great competitor, Original Jim's. The Express Grill was opened and operated by family members that broke away from Jim. The building features a counter, built along the outside wall (there is no indoor dining) for folks to eat standing up. You can get a Polish sausage...or a Polish BEEF sausage for ten cents' extra. I guess that latter offers less snout? Well, you can't knock the hours, and there certainly wasn't a lineup to worry about...but you can walk for thirty seconds and find a better sausage over at... 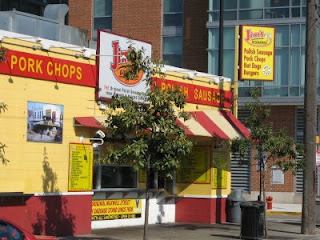 ...none other than Jim's Original Maxwell St. Polish! Lots of photos showing the old location from back in the day, another counter helpfully provided along the outside wall for stand-up diners, and similar prices and menu concept to the Express next door. I chomped into one of the beef polish sausages. I found it a bit tastier than the Express, until I bit into one of the atomic-strength sport peppers. Wow! By far the hottest pepper I've ever tasted in a sausage. I think that's what makes Jim's Original so memorable - well that, and having an expressway less than 50 feet away across the street. Jim's is also open all day, every day. Are you listening, Hot Doug?

There's time for one more dog, so I thought I'd make it a double. 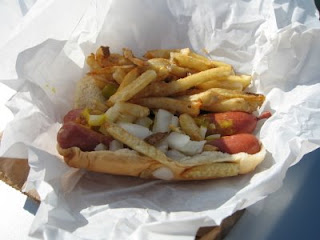 I've landed west of O'Hare Airport to Gene & Jude's Red Hots on Des Plaines River Road near Grand. You can see that they offer "double" dogs, and toss a fistful of tasty fries over the finished product. Ahh...that's a nice hot dog! 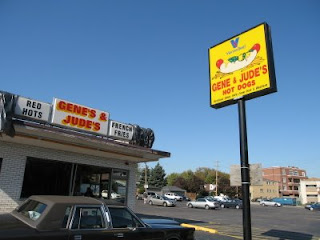 This is just a small sampling of the many, many hot dog stands you can find in Chicago. Trying them out is lots of fun. Best wishes to you for your next visit, and for your stomach's health!
UPDATE: "U LUCKY DAWG" ain't so lucky anymore....IT'S CLOSED!!!

Posted by Mooncattie at 3:15 PM No comments: 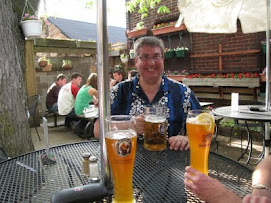